I’ve been working to raise money for the Two Smiles One Hope Foundation for the past 5 years. It started 6 years ago, when as co-race director for the Du the Lakes Duathlon, we adopted Two Smiles as the beneficiary for our next race. All race proceeds are donated.

Here is a blog post from the first event we completed.

Over Labor Day weekend I had the privilege of racing the Skinnyman Triathlon in Skaneateles, NY as part of a team that towed, pulled, and pushed two boys over a sprint triathlon course. The twin 11 year old boys, Jack and Nolan, have Duchenne muscular dystrophy (DMD).

Jack and Nolan could not have been more thrilled to be afforded this opportunity to compete. This day was not about the team behind them or raising money, it was all about the boys being able to be athletes for the first time in their lives and be part of the race with other triathletes. 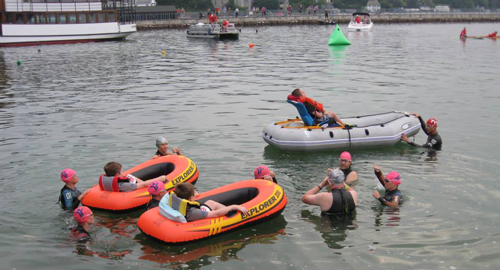 Sponsored by Two Smiles One Hope Foundation and Athletes Serving Athletes, two teams of athletes towed Jack in Nolan on rafts for an 800 yard swim, pulled them on bikes over the 11 mile bike course, and pushed them in running strollers on the 3 mile run. They were joined by a team from Athletes Serving Athletes (ASA) who competed with Shane Lauer who also has Duchenne muscular dystrophy.

I became involved with Two Smiles One Hope three years ago when, as the co-race director for the Du the Lakes Duathlon, we were in search of a local charity to raise money for. Over the past three years we have been able to raise more than $15,000 for which the money goes to DMD research that makes a tangible difference. 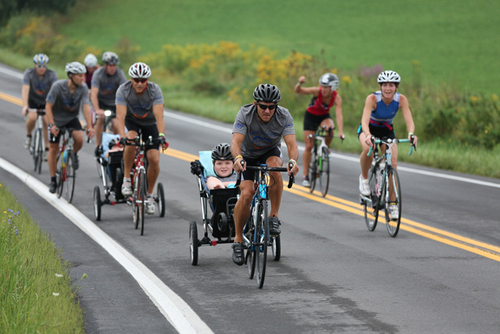 For this race, my leg was the run. A certain amount of nervousness surrounded the race because we had not had a chance to practice with the equipment. The running stroller did not provide as much resistance as I thought it would, but running the hilly course was certainly challenging at times. During the run the boys encouraged the other athletes and gave lots of high fives. 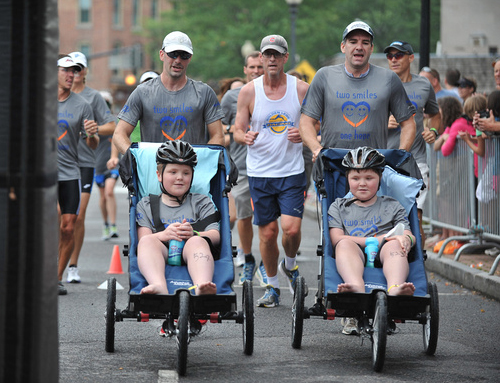 It was the most fun I have ever had at a race.  The race directors were more than helpful in accommodating us, and the crowd and support from other athletes was so overwhelming at times that it gave me chills. The boys seem to be local celebrities!

I hope to be able to race with them again or help other athletes who need support in one way or another. Please read below about Two Smiles One Hope and Athletes Serving Athletes and make a donation!

Two Smiles One Hope Foundation is a nonprofit organization that raises money to support research for the treatment or cure of Duchenne muscular dystrophy.  They aim to increase community awareness of this terminal disease and its affects on young boys.  DMD is a fatal genetic neuromuscular disease that affects all muscles in the body.  Children born with DMD (mostly boys) are usually diagnosed between the ages of 3 to 5 years of age.  Most boys become non-ambulatory by the ages of 10 to 12 years and have a life expectancy in the 20’s.

Athletes Serving Athletes is a nonprofit that brings people together to experience the joy, excitement, and thrill of competition.  ASA offers innovative training, supportive mentor relationships, and high quality endurance events for athletes living with disabilities.

I teach digital media, advertising, and design at Syracuse University. I also compete in marathons, ultramarathons, and triathlons. Point me towards the next adventure.